Well, what can we say about Percy Bysshe Shelley.

He was one of the romantic poets, a philanderer, adulterer and a radical in both his political and social views. Shelley did not see fame during his lifetime, but recognition of his achievements in poetry grew steadily following his death. He was a key member of a close circle of visionary poets and writers that included Lord Byron, John Keats, Leigh Hunt, Thomas Love Peacock, and his second wife was Mary Shelley, the author of Frankenstein. And he stayed in Lynmouth.

There has been much written on his private life (which, to be honest, was extraordinary to say the least and would put hairs on your chest if new to his story, so well worth a spot of research if you are interested), but he spent some time in beautiful North Devon, Lynmouth to be precise, with wife number one. When he and Harriet arrived in the Summer of 1812 from Wales to Lynmouth, he wrote that as they came over Countisbury Hill, they "saw before and beneath them a fairy scene - Little Lynmouth, then some thirty cottages, rose-clad and myrtle-clad, nestling at the foot of the hills. It was enough".

There is no actual confirmation as to where the Shelleys stayed in Lynmouth. What we do know is that he wrote: "The climate is so mild that myrtles of immense size twine up our cottage and roses bloom in the open air in winter." The favoured site was Blackmore's Lodgings (belonging to Mary, aunt of R D Blackmore of Lorna Doone fame), which later became Woodbine Villas. This building was eventually demolished and a new cottage near the site became known as Shelley's Cottage, which, as Shelley's Cottage Hotel, was rebuilt following damage in the 1952 flood disaster. Another theory is that they stayed in the top cottage on Mars Hill. Who knows. but either way, the Shelleys spent time here and enjoyed the beauty and tranquillity of the North Devon coastline. In the Rising Sun pub in Lynmouth on the wall in the corner, is one of his most famous poems A Bridal Song.

Interestingly, he is also known as an early radical leaflet dropper after putting revolutionary pamphlets in sealed wax boxes and corked bottles to be distributed by casting them into the sea and hoping they would be picked up when washed ashore. Shelley also had extracts from revolutionary Tom Paine’s Declaration of Rights printed on posters, which his man servant Dan fly posted in Barnstaple. Both he and the printer were arrested and fined. Shelley was unable to pay the fine and Dan was imprisoned. From then on Government spies kept a watch on Shelley and investigated his life and those of the people living with him.

What a life. He certainly lived it to the full!

For more information on the poets who spent time here, check out this website. http://www.exmoor-nationalpark.gov.uk/Whats-Special/culture/literary-links/percey-bysshe-shelley
at May 16, 2019 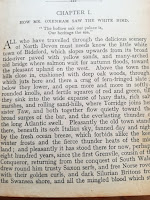 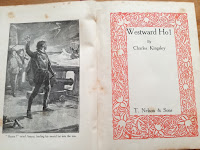 "All who have travelled through the delicious scenery of North Devon must needs know the little white town of Bideford, which slopes upwards from its broad tide-river paved with yellow sand, and many-arched old bridge where salmon wait for autumn floods, toward the pleasant upland on the west."

One of the most interesting things about living in Devon is the amount of classic literature that has come out of the area.

Lorna Doone by Richard Blackmore (celebrating its 150th anniversary this year), poems by Shelley, Wordsworth, Coleridge and Southey and of course, the novel Westward Ho! This is always a great pub quiz question – “which English village is named after a book” or “which is the only village in England to have an exclamation mark after the name”.

While visiting the charity shops in Minehead, we came across a beautiful copy of Westward Ho!, published by Nelson around the turn of the last century and this made us think about the book and the naming of the village subsequently. Author Charles Kingsley of The Water Babies fame wrote the eponymous book in 1855 and set it in Bideford. The book was instantly a best seller and entrepreneurs saw the opportunity to develop tourism in the area, as indeed Thomas Hewitt, George Newnes et al in Lynton and Lynmouth did a little later in the Victorian era.

The Northam Burrows Hotel and Villa Building Company, chaired by Isaac Newton Wallop, 5th Earl of Portsmouth, was formed in 1863, and its prospectus stated:

"This Company has been formed for the erection of a Family Hotel, on an Estate purchased for the purpose immediately contiguous to Northam Burrows, and of Villas and Lodging Houses for Sale or Lease. The want of such accommodation has long been felt, and as no attempt to supply it has hitherto been made by individuals, it is deemed to be a legitimate project to be undertaken by a Company. The salubrity and beauty of the North of Devon have long been known and appreciated. Sir James Clark has placed it in the highest position for health-giving qualities; and the recent publication of Professor Kingsley's "Westward Ho" has excited increased public attention to the western part, more especially, of this romantic and beautiful coast. Nothing but a want of accommodation for visitors has hitherto prevented its being the resort of families seeking the advantages of sea bathing, combined with the invigorating breezes of the Atlantic.... "

The hotel was duly named Westward Ho! and the village grew up around it, with the same name. And so Westward Ho! was born.

Going back the quiz question. The other place in the world with an exclamation mark is Saint-Louis-du Ha! Ha! in Quebec. 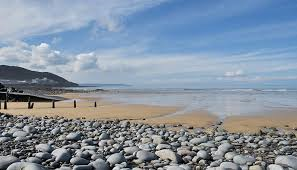 Kernow here we come! On the trail of the South West Coast Path 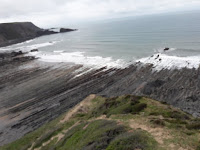 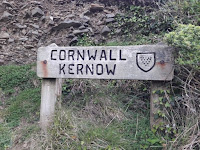 As mentioned previously, the fitter (physically) member of the St Vincent Guest House team is currently walking the South West Coast Path and today, he has completed Devon! (Well, almost, we are saving the final Porlock to Lynton hurrah for the very end of the challenge.) 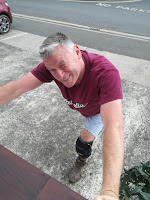 The stretch between Hartland Quay, via Morwenstow (where the less fit member stopped for a beautiful cup of coffee at the Rectory Farm Café en route) to Bude is described as challenging and strenuous. The scenery however is well worth the pain and anguish suffered, as can be seen from some snaps taken during the adventure of crossing counties. 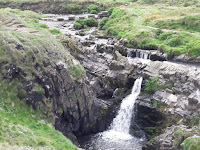 Highlights according to Mike were: finishing, having a shower and lying on the settee nursing blisters. Seriously, the best views of North Devon and North Cornwall, crossing ten rivers in the process, can be seen on this walk and it really is birthday and Christmas for any geologist. Some of the formations are estimated to be around 318 million years old. Was the pain worth it?