Oysters. Really? How much?

The most recent leg of the South West Coast Path led us to Padstow (from Port Isaac) – a beautiful fishing village in north Cornwall where a certain celebrity chef has a couple of eateries and a cookery school. The village is also nicknamed Padstein, to help with guessing the name of the chef. We walked past one of the venues, took a peak at the menu and spotted the price of an oyster (to be sold in pairs, fours or sixes). Really? How much???? (For the answer, please go to the end.) 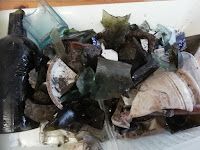 Wind back two days earlier in Lynton when we were excavating under a wall in our garden at St Vincent Guest House. We discovered all sorts of treasures (bottles, jars, toothbrushes, broken pieces of china and pottery), and the deeper we dug, we were amazed to find lots and lots of oyster shells. This made us look into oysters and why there were so many shells up here away from the little harbour in Lynmouth and especially as they are so expensive these days. Well… Here goes.

The history of the oyster. Oysters have been enjoyed in Britain since Roman times (regarded by them as delicacies) and their shells have been found at many archaeological sites (including our own little one here in Lynton, probably not Roman, but Victorian). However, before the Romans came, the Britons regarded shellfish as something to eat when there was no fish or meat to be had. When the Romans withdrew and the Saxons invaded in the 5th century, oyster farming seemed to disappear and it took centuries for the oyster to become popular again when throughout the Medieval period the church imposed a number of days where you could only eat fish rather than meat.

By the end of the 18th century the industry had become highly regulated and although oysters had been the delight of the rich for a very long time, industrialisation cheapened them, making oysters one of the staples of the diet of the poor. Oysters were to be typically found in in public houses, where they were most commonly served with a pint of stout. The claims of stout being a nutritious drink made the pairing with oysters the perfect cheap meal for the working class on their way home with their wages. Demand for oysters was high, with as many as 80 million oysters a year being transported from Whitstable’s nutrient-rich waters to London’s Billingsgate Market alone.

So looking at the position of the shells in St Vincent’s garden, quite a way down the debris strata, we think they may have been enjoyed by our Victorian servants when they were cheap and plentiful. But by the middle of the 19th century the natural oyster beds became exhausted in England and as the oyster beds further declined, what had previously been the food of the poor became a delicacy for the upper classes once again. There you go.