Searching through the censuses for your home can be very satisfying and it has been really interesting searching through the names on the records for St Vincent and then looking at the stories behind the names. One such story is about Ann Elizabeth Ley. In 1891, Mrs Ley moved to Lynton from London to set up home. Looking at the census for that year, she was widowed and “living on her own means” and was “head” of St Vincent Villa (as it was named then) with her daughter, two nieces and two servants. Ten years later in 1901, Mrs Ley had her daughter, two sons, one niece and two servants with her. Proof that it was quite normal even then for adult children to live with their parents. Plus ca change!

The reason for this blog is the very important contribution Mrs Ley made to the Lynton Parish Church, St Mary the Virgin. After her death in 1903 when according to the Exeter and Plymouth Gazette, she “recently contracted a chill, which brought on a relapse [from a serious illness earlier in the year] from which she expired after a short illness, at her residence, St Vincent’s Villa”, the family of Mrs Ley left a vast sum to the church to “defray the entire cost of rebuilding the chancel of the parish church as a memorial". The newspaper goes on to mention that she was “greatly beloved by all with whom she came in contact, rich or poor, and from the earliest moment of her residence at Lynton – now some twelve years since – took a great interest in all local charities, to which she was a generous donor”. The London Daily News in 1904 explained that “the alterations will include an extension of the present nave so as to accommodate the large and constantly increasing summer congregation…, the building of a new organ chamber and vestry and rebuilding and restoring the present organ”. The total estimated cost of all this was estimated to be about £2,500, of which “£1,500 – the cost of an entirely new chancel – will be defrayed by the Ley family”. 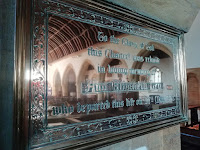 So, if you do pop in to visit the church, take a look at the marvellous chancel on the left-hand side, along with the plaque an

d you will see the contribution one of the former inhabitants of St Vincent’s made to Lynton. And if you want to visit Ann Elizabeth Ley's grave, she is buried in Lynton Old Cemetery near Valley of Rocks.
at September 05, 2019