Cream first, Lynton and Lynmouth (of course) Ambrosia rice pudding, beautiful countryside and the Devon flag – all symbols of this wonderful county. Curious to know about the flag’s background, we thought it was an archaic and historic design. Well, on reflection, if you are lucky enough to be a millennial, it is. 2003 is the birth year of the Devon flag.

The subject of a Devonian flag was raised by the county's contingent of scouts to the 20th World Scout Jamboree in an interview on BBC Radio Devon in 2002. The scouts were unaware of a Devon flag and wondered if any of the listeners knew of a flag for the county. BBC Radio Devon took up the mantle and the search for a flag for Devon began with the public asked to send in designs. Here are the whittled down candidates: 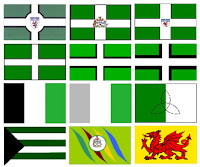 And the first round of voting...

After a couple of rounds of voting (not too sure about the bottom right flag as being symbolic of Devon however, except for the fact that St Petroc may have been born in Wales), the winning flag designed by student Ryan Sealey was chosen. Not without controversy, the creation of the flag drew criticism from Cornish nationalists, who accused it of being an attempt to "hijack" their culture. The decision to dedicate the flag to St Petroc was also not without controversy as the saint is equally popular in neighbouring Cornwall. But it was decided that as Devon's 27 church dedications to Saint Petroc far outweighs the 6 dedications in Cornwall, also the Devon villages named after him such as Petrockstowe and Newton St Petroc, that the county had a strong claim to the saint and Cornwall had already selected Saint Piran as their patron saint many years previously.

Anyway, off to buy our bumper sticker.